Life is funny and God has a sense of humor for sure, but darn if He doesn’t know what He’s doing. One of my favorite verses my whole life has been Jeremiah 29:11 which reads:

My husband and I developed a friendship both before we dated and while we were dating. Living about an hour and 20 minutes from each other helped to facilitate a lot of important conversations. I made a promise to myself to be me fully. I was honest about my feelings when in previous situations I probably would have held it in or tried to ignore it. I was honest about all of my interests, habits, etc. We would say to each other before an uncomfortable moment of honesty, “Honesty couch (or wherever we were sitting at the time)….” Sometimes it was a gushy confession of feelings and other times it was something that made us uncomfortable to tell each other. Through all the driving back and forth (ok, mostly he came to me), I had a peace that I had never experienced before. I don’t know if this is what other people have felt when they fell in love with their forever, but total peace washed over me.

We were together for about a year and a half before we got married. I was 37 years old at the time and it was so beautiful and perfect. There is not one thing I regret about how we experienced our big day. We had a small wedding at a farm turned vineyard, Farris Farms, halfway between my parents in Ohio and his in South Carolina. The guests were 35ish family and close friends who chose to come and spend their weekend with us. The property had multiple lodging options, so we truly got to spend time with those who came to support us celebrating, chatting, and laughing.

And Dang that Baby Carriage Came Along Quick!

Almost 3 months after we had gotten engaged, and roughly 6 weeks before our wedding, we discovered that we were pregnant. Surprise! Though maybe the timing wasn’t our ideal, it was God’s and that made it perfect. Roughly 6 months later, our little love nugget was born allowing us to bring him home for the first time appropriately enough, on Valentine’s Day.

The Journey for Baby Two

In September of 2016, we were ready to expand our family. Coming from a family of 5 kids, I knew I wanted our son to have a sibling. We got pregnant quickly, but at 11 weeks, heaven called for our little angel. At first, I was mad at myself and certain there was something I had done wrong. Over a little time, I was able to see that God had given us his protection and care in some way that I just wouldn’t be able to know or understand.

Two months later, we decided to try again. After tracking this and that with my body, we conceived again, ironically, around Valentine’s Day. Nine months later our 2nd love nugget arrived. He did not arrive as easily or conventionally as his older brother, but he’s been such a sweet addition to completing our family.

It isn’t easy and that’s true no matter how old you are, right? Mommin’ = All-Consuming. I will say, I think my body endured some things that had I been younger, maybe wouldn’t have been an issue, but we’ll never know for sure. I’m tired. Lord am I tired, but aren’t all moms?! I wish my husband and I had had more time together pre-kids to soak each other in and travel, but here we are, taking them along for the ride. It is an honor to get to share the world with them and expose them to new adventures. Maybe there are drawbacks to being an “older mom” but ultimately, I think having lived such a full life before having these sweet babes has provided our family with a perspective that enriches our parenting. Again, everyone’s journey is different and that in and of itself has value.

Seeking that Better Than Good parenting vibe can be tough at times. How has your life journey impacted your parenting? Do you feel your age has made a difference in how you parent? 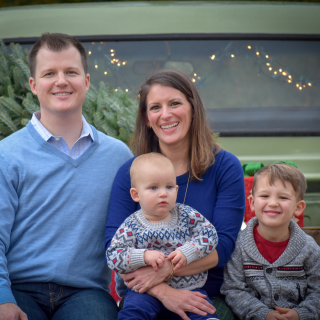